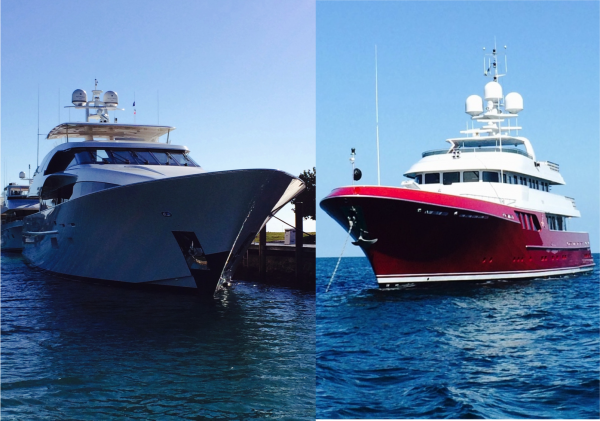 The International SeaKeepers Society returns from a successful shark tagging expedition supporting the UM Rosenstiel School of Marine and Atmospheric Science, Marine Conservation Program and National Geographic. The shark tagging took place at Tiger Beach, Bahamas onboard DISCOVERY Yachts Fugitive, out of West Palm Beach, FL, and Qing, out of Fort Lauderdale, FL. Fugitive is a 125-foot Northcoast and Qing is a 150-foot Cheoy Lee.

Dr. Neil Hammerschlag and his research team, along with SeaKeepers staff, guests and crews of Qing and Fugitive, and National Geographic staff, tagged ten tiger sharks during the four days at Tiger Beach on a custom-made floating platform designed and built by Florida Biodiversity Institute. Of the ten sharks, three were male, providing valuable and exciting new data for what was thought to be an only female-populated area. Ultrasounds were conducted on the seven female sharks that were captured, and several were found to be pregnant. In addition to acoustic tagging and ultrasounds, researchers also attached several satellite tags, recorded morphological measurements, and took blood samples and fin clippings from the sharks, which will help scientists better understand the behavior and health of tiger sharks in The Bahamas.

Part of the expedition was also devoted to collecting and downloading acoustic receiver data from the Tiger Beach area. Researchers are able to track tagged sharks through hydrophone receivers that were mounted on the seafloor in October of 2013. Every six months, receiver data is downloaded. Since October, 20,000 detections by sharks on the hydrophones were recorded. These data give researchers insight to the behavior and habitat use of tiger sharks in the Bahamas, and how these patterns may be related to reproduction, diet and health as well as the potential impacts by tourism at Tiger Beach.

Crittercams were attached to three tiger sharks during this expedition and several hours of footage were recovered. National Geographic’s Crittercam is a research tool designed to be safely worn by animals, combining video and audio recording with collection of environmental data. Crittercams allow scientists to study animal behavior without interference by a human observer, and are designed to release from the animal after a set time.

The International SeaKeepers Society is working with the UM Rosenstiel School to coordinate expeditions to Tiger Beach every six months. By obtaining data regularly, researchers will continue to increase our knowledge about these important apex predators.