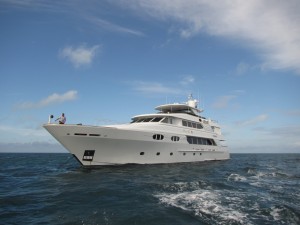 The University of Florida research team, under the lead of Principal Investigator Dr. Leonid Moroz, and by the support of D/Y Penny Mae and crew, have completed the next edition of plankton tows and genome sequencing. The UF scientists conducted plankton tows en route from Panama to West Palm Beach, Florida over the course of several days.

The tiny, planktonic organisms, such as copepods, salps, ctenophores, and juvenile cephalopods that were collected during the cruise, are integral members of marine ecosystems and play a vital role in the health of our oceans. By collecting samples and sequencing planktonic genomics, Dr. Moroz and his team aim to learn more about these critical species by identifying and tracking them to assess their connectivity and dispersal.

D/Y Penny Mae has been involved in several scientific expeditions with SeaKeepers, including trips for similar genome sequencing research as well as shark research.